The Importance of Action Research

Mary Brydon-Miller discusses Action Research – click this link for the video of Mary discussing the importance of action research. Transcription below.

I’m Mary Brydon Miller from the University of Cincinnati, where I direct the Action Research Center and a professor of educational and community based research. I’m also happily the coeditor of the new SAGE Encyclopedia of Action Research, which is coming out in August.

I’ve been asked to think about a definition for action research and that’s a difficult thing to do because in fact, Action Research is sort of an umbrella term for practices that developed in multiple fields over, well in some ways over the past 80 years, but more recently I would say about the past 15. So if you’re working with people, some people call it community based participatory research, participatory action research, some people call it practitioner inquiry, all of those are forms of research that share, I think, a set of values about Democratic practice, about involving participants in research not as research subjects, but as active participants and creating knowledge together. It’s about positive social change whether that’s in organizations, in communities, or schools. It’s about relationships and respect for people and people’s knowledge.

In terms of the kind of work that action researchers do, I think that many people would be surprised at the breath of action research. I know that David has talked a a lot about the organization behavior management part of action research. I actually come out of more community based research and educational action research. And I have students doing things as different as looking at how knowledge is communicated in community supported ivy culture sites, and looking at sustainability issues, to looking at how teachers can work together to make decisions in the schools, to looking at how at risk people and minority youth can use art to communicate the issues that they are facing and develop strategies for addressing those concerns. So it’s a very broad field and one of the things that I think has happened in the past 15 years is that we’ve begun to share that knowledge with one another which I think strengthens our practice overall. And one of the things I think is one of the most important contributions of the Encyclopedia is to enable that kind of exchange of ideas, and practices, and theories, and histories

Well there are a number of topics that had to do with the management side of things that I wasn’t really familiar with. Some of the international studies that were done, some of the histories of action research, We’re working on a couple of articles now, David and I did one, for the action research journal. It was a reflection on working on the program together. And our friends David Greenwood and Bob Dick are going to do one focusing more on the methodological issues and one focusing on the theoretical issues. And one of the things I think a lot of people think is that action research might be useful in problem solving, but is not theoretical and I think one of the things this Encyclopedia really demonstrates is how deeply theorized action research is. And I certainly learned more about a breath of theoretical frameworks by doing this work that I have been familiar with before. The same with the methodologies, if you look at the table of contents there’s something close to 100 different methods and methodologies in the encyclopedia and some of them are practices that I haven’t encountered before, and I’m able to try out now and think about and incorporate into my own thinking and research practices. Some of these have been out for about 30 years or so.

One of the things I think has happened, is not that we have developed a common language about action research, but we now understand one another’s language more effectively, and again in think it’s something that the Encyclopedia will provide, just some frameworks for helping us understand, “Oh that’s what this looks like coming from the perspective of community based health initiatives,” or “This is how they talk about that in organization development,” So understanding that in many ways there are commonalities, but that each is colored by the histories practices, needs by those different fields. So I think that people find a lot of common ground and also some inspiration about new avenues to explore.

Just the scale of doing this, because it is such an international practice, we have contributors from all over the world. And that means challenges just in terms of working with others who are not writing in their first language, thinking about practices that are not generally thought about in English. And one of the sort of challenges going forward I think for us is the dominance of English as an academic language needs to be rethought, and so thinking about how do we both have a common language, and English may be that common language, but then how do we also make the work that we are doing accessible to people who are not native English speakers and not English speakers at all and how do we take practices that are deeply embedded in cultures different from our own and help people around the world understand this. We have a number of entries that are very deeply embedded in cultures that are different from our own and that draw on those cultural traditions, and I think that’s one of the real strengths but it’s also a challenge. We have a number of entries about indigenous forms of knowledge and how those might inform action research. Again, I’m thinking that for both David and me, those were new areas of learning for us that were really important. So the more we can continue to expand those boundaries, identify practices from other cultural traditions, you know the theoretical traditions the other disciplinary traditions and bring those together, the stronger our work will be as action researchers. And you know to some extent I think it’s still, action research is still viewed by more traditional researchers as somehow being questionable, and yet you look at a work like this and you think you know there’s just incredible strength and breadth of knowledge and histories of doing engaged forms of research that I think really puts it on the map you know in a way that things like the handbook, the SAGE handbook, so action research and the general have also been very exploratory in doing.

The contributors have all been really intrigued to sort of see just the scale of the Encyclopedia and are excited to be a part of that. I think that just in terms of giving everybody new ways of understanding action research, new strategies for doing action research. I think for many people, many of our contributors, this is an opportunity for them to be able to help share their knowledge with the broader world of action research. You know I’m thinking of something like critical utopia of action research, which is an approach to action research that was developed by one of my colleagues at Ruskin University, and primarily it was founded in Denmark, but they have an entry that talks about critical utopia and action research and its history and about ways in which it is practiced in parts like future creating workshops. Well you know we just recently did a future creating workshop on sustainably here in the UK that is now moving forward with community partners and students primarily in the Southwestern UK so we’re already seeing the kind of connections and extensions and ability to expand on what might be a local practice and make it more international through efforts like the Encyclopedia.

You know it’s funny because I talked to some of my other coeditors about it, some of the associate editors, who have a very instrumental view of how we use this project. When David I were talking about one of the sort of one of the images we had in our head is our own experience of using encyclopedias when we were little kids, then it was the Encyclopedia Britannica, which pretended to be sort of the source of where all the knowledge in the world was contained and we’re certainly not pretending to that, but how much fun it was to read an encyclopedia and run into something you’ve never seen. And we’re hoping for the same thing to happen, we’re hoping that people, well at least I am, that people will just poke around, look at the word lists, look at something they’ve never heard of and sort of think “What is that?” and read about it, and learn about it, and just expand their knowledge of action research and play with it you know just enjoy it. It is a tool, it is a useful tool for scholars I hope and students who are learning about this practice, but I hope it’s also something that people just enjoy engaging with.

Do you have questions for Mary or David? Ask them in the Forum! 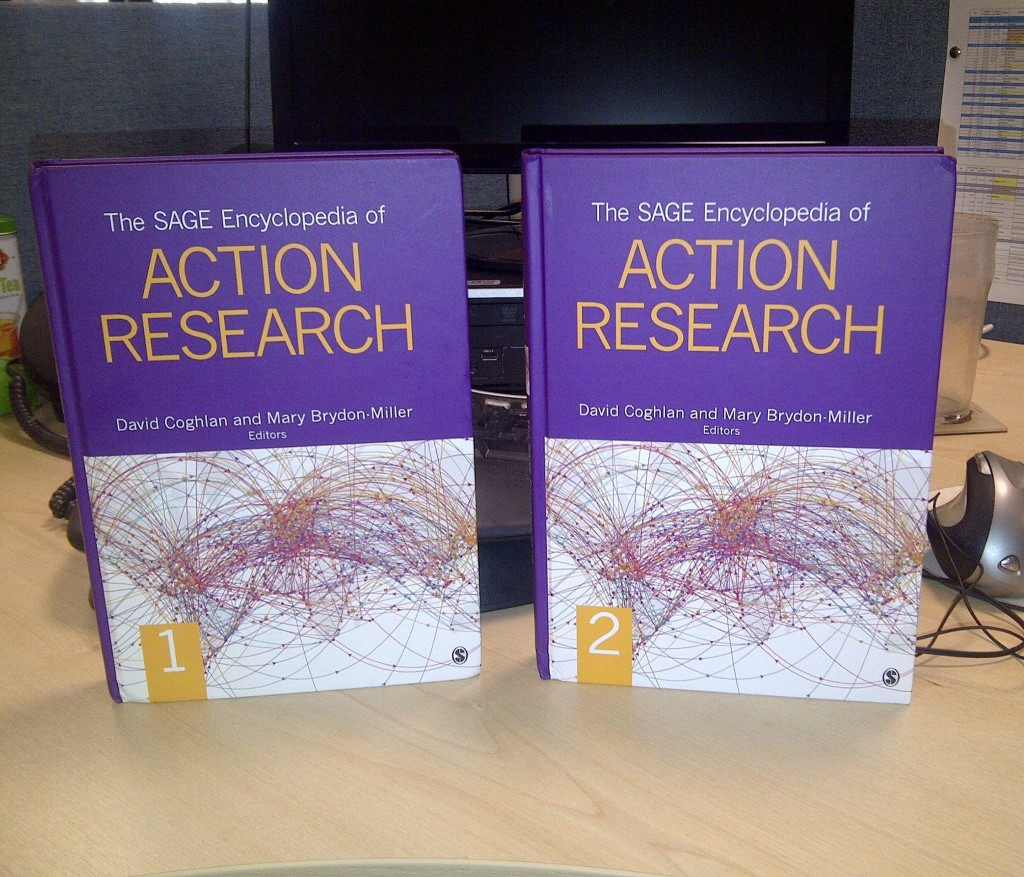