On Kids’ Curiosity by Vicki Stieha 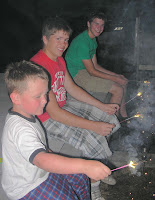 I’ve been on vacation, tucked away in a little corner of the lake region in South Dakota where my husband’s family has a couple lake cabins where we all converge and reconnect each summer.  One of my children, Ethan, is here along with his cousins, Adam and Gavin.  Last night they were lighting sparklers around the fire pit as we adults looked on.  I listened with fascination to their active experimentation with the sparklers.  Part of their conversation went something like this:
Ethan: What happens if you light it from the bottom end?
Adam: it burns up.
Ethan: What if you light it from the middle?
Adam: It goes both ways
[The boys try lighting it from the middle and watch what happens]
Adam: It breaks in the middle [laughing as he watches the curled end fall to the ground].
The boys, both 15, were deeply engaged in this brief scientific inquiry. They were posing questions, devising ways to examine their questions, and acting on them. They were finding answers to their questions through their direct interaction with the “thing” itself. They were active learners and they didn’t need me or any other “teacher” to help them define what they should look for in their exploration.  My role was only to give them access—to the sparklers and to the fire pit in this case.
I was thinking about this scene as I was running this morning.  It seemed to me another example of the ways that being both an insider and an outsider to their action helped me to draw more meaning from it.  Obviously my “insider” status as mother and aunt gave me access to the boys’ conversation.  My “outsider” status (my educational researcher-self) was drawing meaning beyond the experience itself. It reminds me of John Dewey’s still clarion calls for education in which children encounter learning by interacting with the objects of their fascination.  It reminds me that learners themselves have “burning” (ok, pun intended) questions that they will explore if they are given an opportunity to do so.  Luckily for me, they were also willing to let me share this scenario with you.
I would love to hear about the questions that other teachers have as they sit back and watch the wondering of others? What ideas do their questions generate for you?