Community AR in Action: Making the world bigger and being a human sharing other human experiences

Part of this blog post uses excerpts from an article co-authored by Nick Fesette, a graduate student in my department at Cornell University who has been a co-facilitator with me for PPTG for two years, and myself. The full article is entitled Where the Walls Contain Everything but the Sky: The Birth and Growth of the Phoenix Players Theatre Group and can be found here.

For the past five years I have served as a Facilitator of the Phoenix Players Theatre Group (PPTG) at Auburn Correctional Facility, a maximum-security prison in Auburn, New York.  PPTG is a grassroots transformative theatre collective founded in 2009 by inmates Michael Rhynes and Clifton Williamson. The group uses theatre techniques to create an artistic and therapeutic space in which a transformative journey is initiated, leading to personal and social redemption. PPTG is a multi-faceted project, for its incarcerated members and civilian facilitator-participants alike. 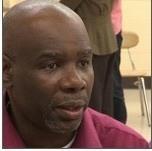 Michael Rhynes, one of the two original PPTG founders, has been incarcerated for over thirty years. “Phoenix” was selected because, to Michael, the Phoenix, rising out of the flames, represented transformation, not rehabilitation. For Michael, rehabilitation is about other people having control over your life while transformation is about taking your own life in your own hands.

We have collaborated with the men of PPTG in creating a training process that serves as a catalyst to transformation within the prison setting. After each cycle of training, the incarcerated men devise performances, with the guidance of the facilitators, which take place approximately every 18 months to two years.  The men perform for an audience of 80 invited civilians because they want to be witnessed–to alter the stereotypes about incarcerated people and to reveal themselves as unique/multi-faceted individuals who transcend the labels that define them within the greater society

Witnessing is a critical concept for PPTG and one of the group’s main goals. It is part of the transformative power of the PPTG process. Through the sharing of stories and experiences that spread outside Auburn’s walls the incarcerated members of PPTG might open up in the minds of the public alternate perceptions of themselves and of incarcerated people more generally. We are uniquely poised to bear witness to the group because as facilitators we create, perform, and explore alongside them. With one foot inside the walls and one foot outside, it is our charge to introduce PPTG’s process to a wider audience. 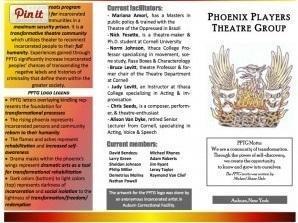 It’s challenging to frame how we participate with the men of PPTG because of their complete lack of “power” within their world and our limited ability to “collaborate” with many of those who hold “power” within the prison system, as well as our dependence on the administration to continue to “permit” the program to take place. We can be “locked out” of the facility for weeks at a time based on the needs of the administration to reassert authority or to meet the security needs in the prison. Yet, the administration and the Department of Corrections and Community Services (DOCCS) in Albany have been very supportive of our work to date, granting permission for news stories, performances, the creation of the web site, and the filming of the documentary.  This, in turn, has gained the men of PPTG–if not “power”– a bit of “free space” in which to operate–and to experience, for at least two and one-half hours a week, a certain type of spiritual and emotional freedom within the larger context of their incarceration.

Finally, there are the barriers to open communication between those of us who are “facilitators” and the men in the group.  We cannot call them or write to them, nor can we be seen as “facilitating” communication from them to others outside of the facility.  We cannot communicate with their families either.  We can only participate with them in those two and a half hour sessions once weekly. Perhaps this is what makes the ability to create the web site such an extraordinary departure from those constraints on our contact.

What we share with other P/AR work is the collaboration that happens “in the room” each Friday evening, our complete acknowledgement that the Men of PPTG are THE experts on their environment and their journeys, and our functioning as providers of information and facilitators in the fulfillment of their goals.

There are four points that bear some discussion:

You can learn more about PPTG, watch videos of performances, meet the players, facilitators, and collaborators and more by accessing the website here. 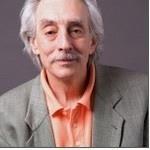